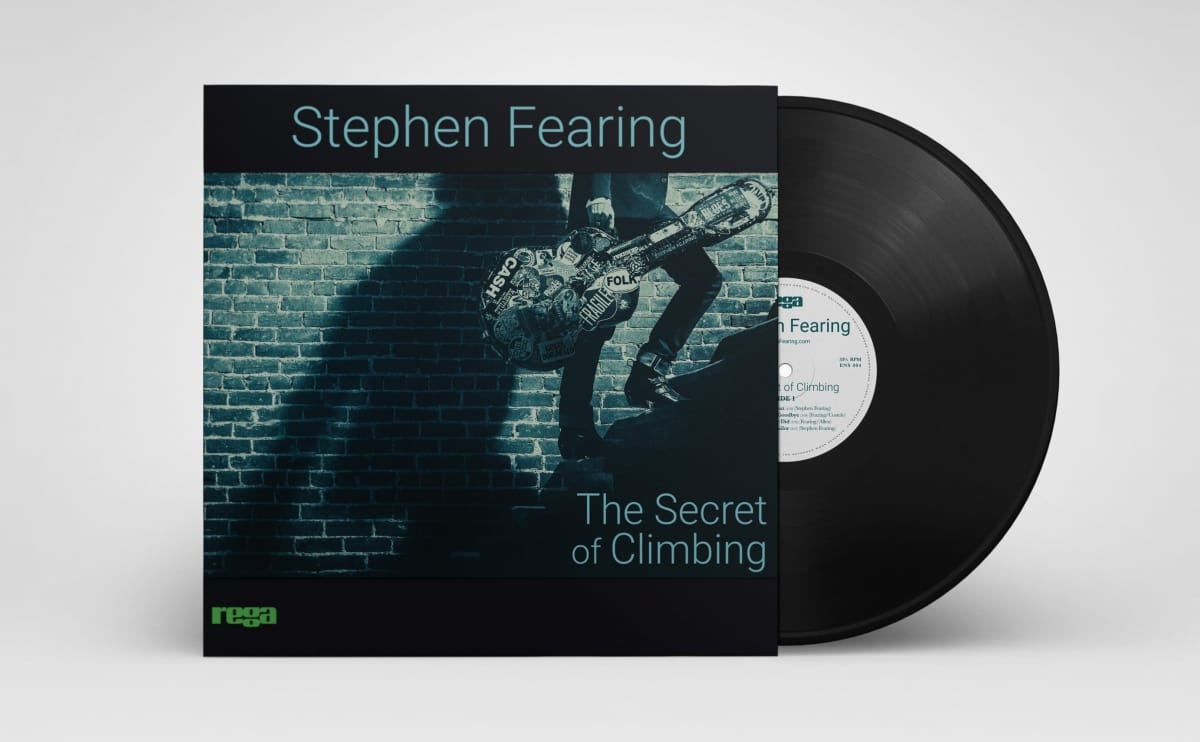 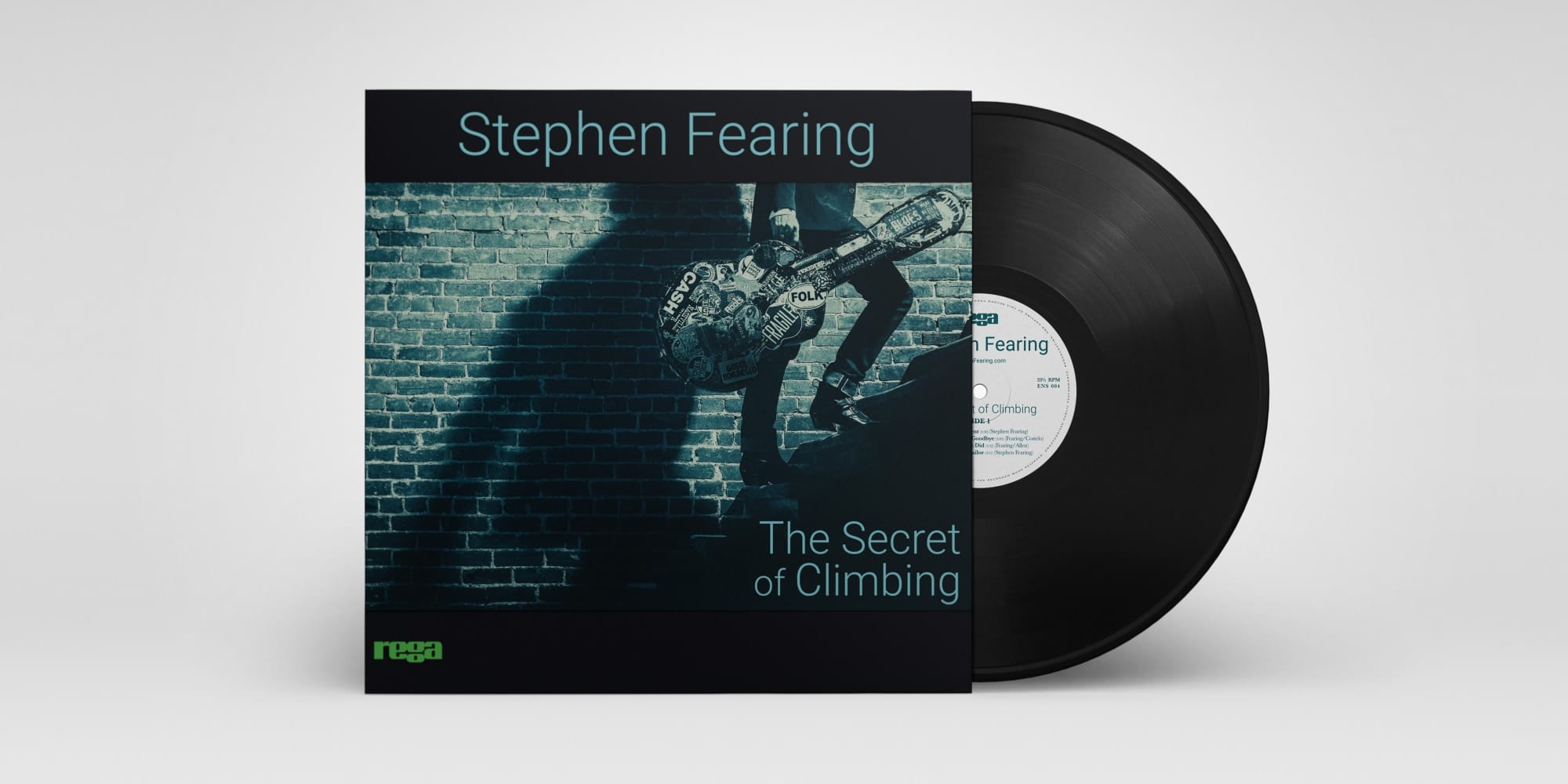 The Secret of Climbing

Stephen Fearing’s music is a mesmerizing blend of roots, folk, and pop. Co-founder of Canadian roots-rock supergroup Blackie and The Rodeo Kings, he is a beguiling teller of tales and master guitarist who delights audiences throughout North America, the UK, and Europe. A multi JUNO and Canadian Folk Music award winner, his ninth solo album, Every Soul’s a Sailor, was named 2017 Worldwide Album of the Year by Blues & Roots Radio.

This 180g Audiophile LP is the closest you will get to experiencing Stephen sitting in your front room singing and playing for you.

Because this is what actually happened

Rega’s founder Roy Gandy had suggested Stephen record his guitar and vocal separately in the traditional studio manner. Stephen felt the quality of his performance depended on the authenticity of him playing and singing simultaneously.

For this process to work it would be usual to use a Stereo pair of microphones positioned a distance from the singer. However, good room acoustics are crucial for this method to be successful. And Roy’s front room was hardly ideal! Another solution was necessary to capture Stephens virtuosity.

Roy experimented prior to the recording session using two separate microphones close to the voice and guitar. To avoid acoustic bleed between the two, a simple shelf was constructed between the two microphones giving promising results. However, the difficulty of performing in such a restricted environment was a serious concern for Gary Bennett who co-produced the album. This concern was promptly dismissed by Stephens confidence and experience as he immediately sat down, made himself comfortable and began to play and sing.

Tape running…the initial results were astounding, and excitement filled the room. This enthusiasm immediately fuelled the first three songs which were recorded within half a day. By the end of the second day a miraculous eleven tracks had been laid down, of which eight made this incredible album.

Incidentally, well-recorded acoustic guitar nearly always needs some form of enhancement such as added reverb and/or EQ. Stephen plays a guitar handmade by the legendary luthier Linda Manzer which allowed a rare recording without the use of effects.

This album was created with a little luck, a great deal of hard work, iconic tape machines and two days of faultless performances by Stephen.

The voice and guitar were directly recorded onto two tracks of a meticulously restored 8-Track one-inch Studer A-80. No mixer was used.

The two microphones were directly interfaced into the Studer via a custom-designed Rega microphone pre-amplifier. This was loosely based on the fully symmetrical design of the exceptional Rega Ios / Aura Moving Coil pre-amplifiers.

The guitar microphone was a Pearl CC22. A uniquely configured microphone using a rectangular diaphragm chosen for its natural characteristics.

Two different voice microphones were used during the sessions, the Pearl CC22 and an Audio Technica AT-4040

Using a Rega custom-built, all discrete, 8 track mixer (designed by Regas Terry Bateman and based on Rega hi-fi amplifiers) the two original tracks were then mixed down onto a two-track quarter-inch Studer A-80.

This process was particularly critical. Roy used PPM meters to ensure every track was laid down at a similar volume level. This level of care eliminated the need for any further mastering in the cutting studio and a cable was run from the studio tape machine directly to the Neuman cutting lathe.

All the tracks were recorded at 15 IPS on 80R tape. Finally, Ray Staff conducted the tape splicing of the recorded tracks but crucially no studio mastering was necessary or used.

Without a shadow of a doubt, one of the best songsmiths on the planet. Quality albums… stunning shows.

Long-heralded in Canada for his articulate songwriting, immense guitar skills, and dusky baritone.

A master of the finely-turned phrase and the perfectly-pitched line.

Please select the correct postal value for your location. We cannot ship if insufficient postal funds are paid.